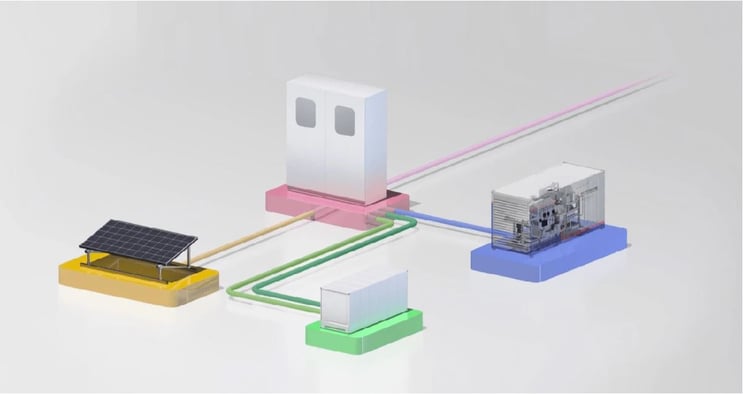 Africa needs electricity. Sub-Saharan Africa has the lowest household electrification rate in the world, averaging just 42% in 2016 according to the World Bank. What's more, per capita electricity consumption is declining because while a growing middle class is using more power for appliances and devices, the population is growing faster than new supplies. Global consultancy McKinsey predicts a four-fold increase in electricity demand by 2040.

Getting electricity to those who need it most is challenging on many levels. Governments lack budgets for big infrastructure projects and it's logistically difficult to connect remote communities to the grid.

The focus, however, is increasingly shifting from expanding national grids to off-grid and mini-grid solutions. A distributed power solution that generates electricity locally in the communities where it is consumed is proving key to electrifying Africa. For example, PW Power Systems recounts how an Algerian community's Ramadan was saved by its mobile gas turbines, which leverage proven advanced aircraft engine technology uniquely applied to complex power system solutions.

But there is also a global movement afoot that seeks to further the contribution of renewables into nations' energy mixes. And while countries like Kenya are touted by the United Nations as centers of excellence for geothermal power, the problem that many communities around Africa are off-grid still persists.

"Ten years ago, people said renewables were too expensive," says Gregory Ireland, a researcher at the University of Cape Town's Energy Research Centre. "Now solar prices have dropped roughly ninety percent in the last ten years and are expected to fall further." Lower costs could now afford the opportunity for renewables to be deployed outside of utility-scale levels.

An opportunity to leapfrog

While electrifying Africa is a huge task, it's also a huge opportunity. "If we could build the world's energy system again with the technology we have today, we wouldn't build a centralized system," Mr. Ireland says. "We would build a distributed, renewable, interconnected system."

The World Bank's 2018 Africa's Pulse report agrees: "Technical advances raise the question of the extent to which sub-Saharan Africa could 'leapfrog' over the traditional stages of national grid-based electrification that took place in today's advanced economies, through much greater reliance on 'mini- grids' or 'micro-grids' serving small concentrations of electricity users, and off-grid, home-scale systems."

The holy grail is to integrate renewable energy with storage and conventional backups in a holistic way. Balancing the different energy sources has proven an elusive feat, until now.

The hybrid off-grid system, called EBLOX, manages the fluctuations in renewable energy flow by using a battery to level supply and to store the surplus. Meanwhile, a diesel or gas engine provides backup---all coordinated by the COORDY control system. Using proprietary technology, COORDY optimizes the power distribution between solar panels, the gas or diesel engine, and the storage battery to protect the system from sudden fluctuations in photovoltaic power or demand.

The EBLOX can produce 500-2,000kW, or enough to power 500-2,000 households. If more output is needed, multiple EBLOX systems can be installed in parallel, says Eiji Takahashi, Project Manager of 'EBLOX' at MHIET, adding that the system is flexible and easily maintained, providing a reliable energy solution for the communities that it serves.

Several studies have found these hybrid mini-grids systems that leverage renewable energy sources to be a more sustainable and cost-effective alternative to diesel generators, which currently dominate power services in rural areas.

Africa is well-suited for a distributed, hybrid solar system. A 2015 report estimates sub-Saharan Africa has 11 TWh of solar capacity---far exceeding the total 345 Gw it will need by 2040.

Distributed power is set to seize on Africa's solar excesses while offering additional advantages, too. By producing electricity close to consumers, the system reduces losses from long-distance transmission and increases energy efficiency. And for areas where challenging terrain, protected forests, great distances or low population density make the cost of connecting to the main grid prohibitive, distributed power is providing the answer. It's also a solution for areas that have been cut from the grid by natural disasters, not just in Africa but in developed countries as well.

It's innovative technologies like EBLOX that are making the greatest strides toward achieving The United Nations Sustainable Development Goal #7: to ensure access to affordable, reliable, sustainable and modern energy for all.

"If we truly believe a modern society and modern forms of economy can provide people a better life, then they need electricity, they need a lot of it and they need for it to be affordable," Mr. Ireland says. "The most expensive energy is no energy because of the cost of lost opportunity. Africa has the opportunity to develop twenty-first century clean, reliable, renewable systems that the rest of the world can be jealous of."